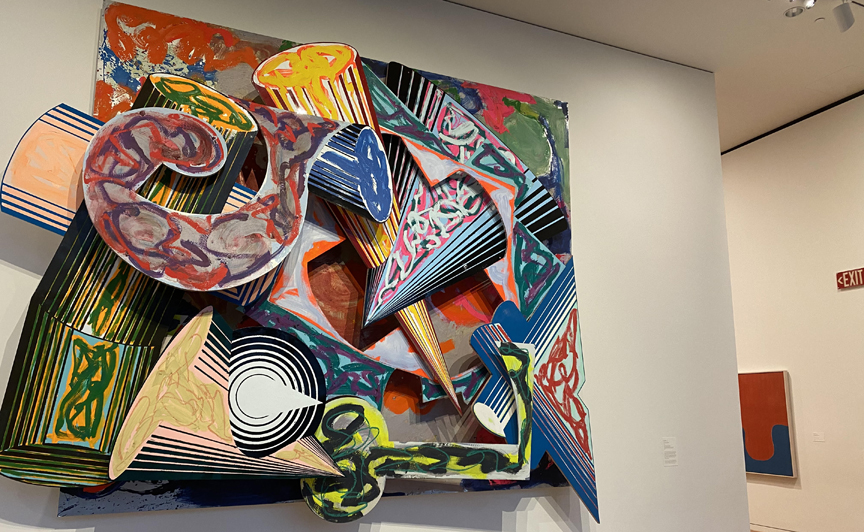 In better times when we used to find captivation and optimism in our abilities, people would go to the public space in the hopes of finding illumination. At the museum one would find the work of those that spent their lives in the academy of art, where the artist would learn complex dedication to the craft, and become a Master. Their work would be sought after for it’s sheer beauty, as it would reveal a part of ourselves as a species that would otherwise be difficult to define.

This is not the work we will be discussing today.

Last week I decided it would be best to visit the contemporary art museum and punish myself. As I made my way down the “hallowed halls” of ascendant works of ego, with my company at hand, I found myself knee deep in contemporary ‘aristocratic tastes’.

While our cultural elites lambast Western classical aesthetic as a thing of snobbish colonialism, the world of modern art sits in an ivory tour of corrugated steel slapped together by mentally ill sycophants supported by high bankers and media personalities. As we know, modern art is an insular community created by the power elite to define culture via a top-down monopoly. With that said, allow me to share my modern gallery experience, and please try to keep a closed mind about it.

The first item looks like a Mardi Gras female impersonator exploded inside a plastic rectangle and that was probably the intent. However dumb this is, the title and description manage to make it worse.

As one can see, the real coup de grace of this masterpiece is of course the used condom. This is supposed to challenge the viewer’s sensibilities about society’s “insecure” feelings on public sexual interactions or whatever in a big-time edgy and hyperintelligent manner. It is not meant to revolt the viewer with the idea that weird art-perverts have gone around collecting used condoms off the street. This is where the viewer chooses their own adventure.

Next we are greeted by this thing. which makes you think; blue. Somewhere in smooth ridges of the brain, this “artist” envisioned a mass of loyal followers, sitting cross-legged repeating to themselves “bluuuuuuue.” this is supposedly profound in its simplicity… I guess. Or maybe for some other reason? Who cares?

I love when they do this maneuver right here. By positioning these two pieces together it invokes the illusion that they are somehow equal in quality, instead of one piece being made by a master craftsman in the medium of oil paint, and the other a giant waste of material made as a political / social statement that reinforces elite opinions and values covered in glitter. The museum found it important to use this strategy several times, as we will see.

Next we come to Art’s shining star of master imitation and vitriol, Kehninde Wiley. For those not familiar with Kehinde’s work, do a quick internet search of his decapitation paintings and see why he is a darling of the prevailing system. These paintings seem to depict Kehinde’s characters chopping the heads off the people who created the masterpieces he attempts (poorly) to imitate. Oh, and have a bunch of flowers.

Now this one will floor the viewer with it’s detail, but not in the way, say a Peter Paul Reubens painting elevates with the beauty and complexity of the human form, No, this one is here to make sure the viewer sees every disgusting imperfection front and center as a complete inversion of the sentiment I stated previous. What is with the power elite and their support for inversion of beauty and values? You can only present plain skill if the message is ironically anti-art.

Aw yes, the viewer is supposed to build the wall. The viewer is now the artist. Or is it a window to the house of the garbage-fairy?

The web of traditional beauty standards is being transgressed upon in a Kafka-esque criticism by a giant beetle in this hokey macrame bullshit. The web is supposedly bad for being pretty. Pretty things are bad in modernism. The viewer’s brains are now insectoid and estranged by trying to make sense of this stupid nonsense.

Juxtaposition again. A random assortment of junk is equal to a master work because we have put them side-by-side. Tricky tricky. Nice addition of wall-words with baby message.

I’m  going to assume the artist has a foot fetish and he’s calling our feet diamonds because that is exactly what a modernist critic would say to try to excuse this outrageous stupidity.

This piece is comprised of a bunch of infants, keys and traditional depictions of architecture swirling a downward spiral. The ‘message’ is on point for ‘modern art’.

This piece I have dubbed the “acupuncture nightmare”. Modernists have acclimated the viewer to this kind of ‘concept’ as art. It exists to jar and create a statement on art itself, it is the most cunning of their tricks as to a normal disinterested gallery-viewer it can seem inexplicably mysterious and requires some gawping, therefore it is ‘intellectual’.

A quilt with burning police cars with the excitingly current title: ACAB “all cops are bastards” employs the traditional aesthetic of quilting. Unfortunately for the ideologues behind this work, ACAB became old hat for them recently. This piece will further date itself until the point it becomes memory holed for being “problematic to our values.” For now it gets to adorn the halls next to the master works.

Last and I hope to God the least, we have a two part series piece. Well maybe, as this dumb massive looking dance of nonsense, sits directly across from this.

Now this was the best part of the visit. Out the window of this carnival of elitist torment and intellectual insults sits a beautiful church proudly displayed as it ages gracefully. The soul that went into building that church does not rely on them to maintain itself. Nothing the Modernists will build can stand the test of time, or of a new elite ruling class with a different set of values.

Modernism has a problem that I’m still not sure it is ready to account for. As with traditional art and architecture, by God’s own graces, over time this work ages in a way that suits its principles – what we know as Ruin Value. Modernism is principled on being insincere, cheaply made, politically agitating, and forgettably temporary, and it would be interesting to see how future critics will frame it. The critiques they use to tear down a society are not the tools used to build one. This is a major conundrum they will find they are trapped in, soon enough.

2 thoughts on “A Trip to the Modern “Art” Museum.”