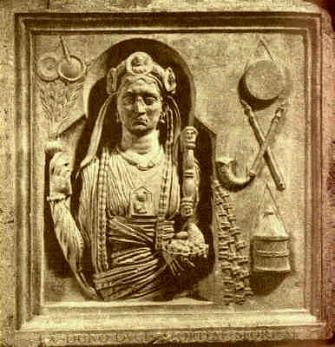 The entire physical cosmos, a “moving image of eternity” manifested by the Gods in space and time according to an eternal, immutable, superabundant paradigm that is contained within Them, is itself a holy shrine and object of contemplation, and because all creation is fractal, exhibiting self-similarity across scale, everything within this holy and perfect shrine, this theophany, can itself be consecrated as a theophany, provided one has penetrated into the essence of things, and uses the proper sacramental and hieratic techniques. Indeed, this is what Pagan cultus in temples and festivals was all about.

“The pagans were not worshipping the Oak, but rather worshipping Donar and used the oak as a symbol (big strong tree for a big strong god). “

There is a metaphysical aspect to it, in that there is an actual divine presence in the consecrated object of worship, a kind of breath or illumination that is called down theurgically (the Germans would not have called it theurgic and may have not had the concept or have had a different, analogical concept) through ritual consecration, the demarcation of a sacred space that is the object, or the adytum of a temple. The Hindus have a practice called “Prana Pratishtha” that is equivalent to this, and the ancient Greeks and Egyptians did the same thing, it was referred to as the “animation of statues”, in Greek “Agalma Empsychon.” Mundane scholars today, who have no understanding of religion outside their specialty, like to interpret it as the creation of mechanical automaton (i.e. robots) but this is not what it means at all, despite the fact that the Greeks certainly did have novel mechanical devices.

In fact, there is a more immediate analogue to this, in the Christian mass, which itself is a kind of theurgic sacrament (this is not an original insight of mine), where the host, the bread and wine, become indistinguishable from Christ’s flesh and blood, despite looking no different.

This kind of ritual “drawing down” is simply the immanent side of transcendence, evoking the transcendental realities and making them immanent in physical matter that participates* in the archetypes being called down. This was understood by the ancient Pagans as predicated on operative principles of cosmic sympathy (first elaborated philosophically by the Stoics and perfected by the late Platonists), the principle of “like is known by like,” and “as above, so below” being aphorisms descriptive of such sympathy. The technical term used here was “Sunthema”+.

Since all things have their source in divine archetypes, and certain material things belong to certain deities (the Picatrix and the Occult Philosophy of Cornelius Agrippa have readily available lists of items and their corresponding deity), if one constructs a ritual object or space using the proper sunthemas, one could then call down the appropriate divine power. Oak is a sunthema of Jupiter/Thor/Donar, thus a strong Oak tree is a perfect vehicle for the illuminations of this God. Verbal formulas were also seen as a kind of sunthema, as well as particular places thought to belong especially to certain deities (often lesser deities like Nymphs, though even entire cities could be consecrated thusly to a deity, as Athens was to Athena).

Mircia Eliade understood this when he wrote in “The Sacred and the Profane:”

“The modern Occidental experiences a certain uneasiness before many manifestations of the sacred. He finds it difficult to accept the fact that for many human beings, the sacred can be manifested in stones or trees, for example. But as we shall soon see, what is involved is not a veneration of the stone itself, a cult of the tree in itself. The sacred tree, the sacred stone are not adored as stone or tree; they are worshipped precisely because they are hierophanies, because they show something that is no longer stone or tree but the sacred, the ganz andere.

It is impossible to overemphasize the paradox represented by every hierophany, even the most elementary. By manifesting the sacred, any object becomes something else, yet it continues to remain itself, for it continued to participate in its surrounding cosmic milieu. A sacred stone remains a stone; apparently (or, more precisely, from the profane point of view), nothing distinguishes it from all other stones. But for those to whom a stone reveals itself as sacred, it’s immediate reality is transmuted into a supernatural reality. In other words, for those who have a religious experience all nature is capable of revealing itself as cosmic sacrality. The cosmos in its entirety can become a hierophany.”

Algis Uzdavinys elaborates on this process in much greater detail in his essay, “Voices of Fire:”

“The gods (neteru) do not literally dwell on earth in their cultic receptacles (statues, temples, human bodies, animals, plants), but rather install themselves there, thereby “animating” images and symbols. A deity’s ba (manifestation, noetic and life-giving power, descending “soul”) is somewhat united with the cult statues, processional barques, shrines, reliefs on the walls, sacred texts and the entire temple or the temple-like tomb.

The statue as a proper receptacle (hupodoche) for the divine irradiation is analogous to the purified human body of the royal person or of the “dead” initiate, and the descent of a deity’s ba resembles the approach of an active Platonic Form which informs the passive womb of matter and, consequently, establishes the manifested theatre of articulated and animated shapes. So the divine ba descends from the sky (or rather appears from the atemporal inwardness, since theophanies a priori constitute all manifested reality) onto his cult images (sekhemu) and god’s heart is united with his cult images.”

So this drawing into a material object on this world of a divine illumination, making it a fit object of worship, is predicated on making immanent something that is transcendent, and indeed there is no real divide between immanence and transcendence, they are two sides of a single coin, and ultimately everything is collapsed into a single non-discursive, atemporal and aspatial point, and we perceive things as extended in space and time, and conceive of things by discursive separation, because of the state that our embodied, mundane consciousness is in. Hence the need for contemplative practice, so that one can “revert upon oneself” and thus reestablish our soul as an ourobourous, energizing noetically in a perfect circle instead of in the erratic line of everyday understanding, which is ignorance and samsara.

*”participation” is a technical term of Platonism, referring to the manner in which all things in this realm are a suspended from eternal Divine archetypes which are their causal source. I find the metaphor of holographic projection to be very illustrative of this, though no metaphor will be able to capture the process fully. The ancients used metaphors of a reflection in water, or a seal imprinted on wax.