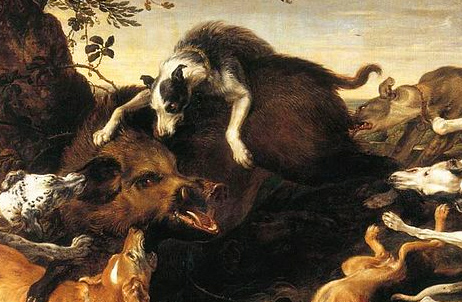 There are many strange and romantic accounts of animals being used in ancient warfare. One of the more eccentric examples being the war pigs, used specifically by the Romans to various purpose, but perhaps most spectacularly as an effective counter to war elephants, who were frightened by them. This is not a PETA-friendly story; it is a story of glorious, flaming pigs dying for Rome.

The use of animals in ancient battlegrounds is well documented. Armoured war horse were of course a norm. Dogs were used in defence; according to Strabo Roman dogs were protected by ‘coats of mail’, and there is an account from Marcus Pomponius Matho’s invasion of Sardinia of war dogs hunting down enemy combatants hiding in caves. Pigeons were commonly used military messengers, from ancient times up to very recently.

But our most detailed account comes from Lucretius, who outlines tactical experiments against Punics using animals as weapons: lions, bulls, and boars. To apparently disastrous results.

Bulls, boars, and lions were also tried in battle, Some let slip strong lions before them, with armed trainers and harsh masters to control them and to hold them in leash; but in vain, since when heated with the promiscuous slaughter they ran wild, and proved to be useless. They threw the squadrons into confusion, friend and foe alike, on all sides shaking the frightful crests upon their heads, nor could the riders soothe the spirits of their horses terrified at the roaring, nor guide them towards the foe. The she-lions enraged bounded this way and that, and leapt straight for the faces of those that met them, or tore at others unawares from behind, and clasping them close bore them to the ground helpless from the wound, holding fast to them with strong jaws and curving claws. The bulls tossed their own friends and trampled them underfoot, and laid bare flanks and bellies of horses, striking from below with their horns, and scored up the earth with threatening in­tent.

Quite the scene. Regarding pigs and elephants specifically, Pliny the Elder (Natural History) reported that armoured war elephants were “scared by the smallest squeal of the hog”, as well as horned rams, both of which were allayed against them at Pyrrhus. It is not impossible to imagine they were also armoured, as were the war horse and dogs. According to Pseudo–Callisthenes, Alexander the Great had first learned about this “secret weapon” against war elephants from Porus. Procopius tells us that in the 6th century AD a single squeeling pig employed by the defenders of Edessa frightened away Khosrau’s siege elephant.

Accounts of what I consider the insane pinnacle of archaic animal warfare involve the ‘incendiary hog’ or ‘flaming pig-bomb’. Reports of these being used in battle come to us from Polyaenus and Aelian, and the account of the siege of Megara in 266 BC. The siege was broken when the defenders coated their pigs with pitch, or resin, then set them alight and drove them towards the enemy’s war elephants. The elephants broke rank and fled in great terror, destroying much of their own army in the process. The practice was famous enough to be immortalised in a Roman coin from this time, depicting an elephant on one side, and a pig on the other.

For every measure there is its counter-measure. As Aesop teaches us, the size, temperament, or seeming innocuousness of a creature does not describe wholly its ordinance or capability.