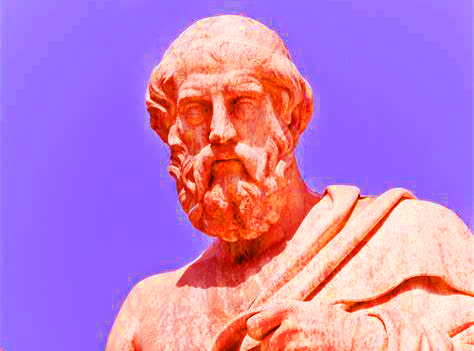 “It has always been correct to praise Plato, but not to understand him” wrote British philosopher Bertrand Russell in his History of Western Philosophy (1945). Today, seventy-five years later, it is no longer ‘correct’ to praise Plato – at least not for his contributions to philosophy – and what is taught about him in most Western schools and universities is an oversimplified, distorted caricature that bears as much resemblance to the real Plato as Picasso’s Weeping Woman to a real woman’s face. In this article I will address the most common misconceptions about Plato and explain the reasons behind their popularity.

One misconception that is all but ubiquitous in high-school textbooks is the notion that Plato believed in a perfect world above the sky, populated with perfect, ideal versions of every animate and inanimate object in the visible world; according to this reductionist interpretation of Platonic ontology1, the visible world is a mere illusion and only the eternal, transcendent world of Forms is truly real. The example that is most commonly used to explain Plato’s theory of Forms puts forth a comparison between three different beds: a bed depicted in a painting, a physical bed and the ideal bed. The picture of the bed is to its physical model as the physical bed is to the ideal bed that exists in the world of Forms; in other words, all the different beds that exist in the physical world are merely imperfect copies of the one true bed in the world of Forms.

The example of the three beds comes from a decontextualized passage in Plato’s Republic (X 596a-597a), whose purpose is to justify the banning of imitative poetry – meaning drama and any other form of poetry in which the author impersonates different characters – from the ideal State: the art of poetry, which Plato compares to painting, is thrice removed from the universal truth of the Forms and, for this reason, it is not conducive to the betterment of society. Plato, wanting to contrast the art of the craftsman with that of the painter, chose the example of the bed for expediency’s sake, as using a natural object would have required a lengthy digression on the role of the divine Demiurge (Greek for ‘craftsman’) in the creation of the Universe2. That Plato did not intend for this and other similar examples to be interpreted literally is confirmed by his most famous disciple, Aristotle (Metaphysics 991b, 1080a), who criticized his theory of Forms for not including forms of artefacts.

The notion that the Platonic Forms exist in a perfect world above the sky originates from the famous Chariot Myth in the Phaedrus (246a-250c: 247c), where Plato describes the nature of the human soul by comparing it to a charioteer driving a pair of winged horses. While divine souls are perfect in every way, human souls struggle to remain in heaven, because one of the horses – symbolizing material desires – pulls them down towards earth. As long as a human soul is able to join the gods in the contemplation of the “colorless, formless and intangible truly existing essence” in the “region above the heaven” (hyperouránios tópos), from which all souls receive nourishment, it is able to retain its wings; however, when the charioteer can no longer control the horses, the soul, unable to partake of the divine nourishment, loses its wings and falls to earth, entering the cycle of incarnation. Plato then goes on to describe a hierarchy of incarnations based on how much divine nourishment – that is, knowledge of the Forms – the soul has received.

No reasonable person would argue that Plato’s description of the soul in the Chariot Myth should be taken literally, but interpreting the hyperouránios tópos as a literal place above the sky where all the Forms are located is just as unreasonable. Plato often uses allegory and myth to explain abstract ideas, especially when discussing the existence of the soul outside the body: saying that the pure Forms exist in a “region above the heaven” is a figurative way of saying that they exist beyond space and time. This, however, does not mean that the eternal, unchanging entities that Plato calls ‘Forms’ (eidē, or idéai) exist only outside of space and time: on the contrary, all physical objects, both animate and inanimate, derive their essence from these perfect entities. The process through which the Forms have come to be instantiated into the material world is explained in the Timaeus by means of a creation myth: the Universe is the product of a rational design, carried out on behalf of God by a divine Craftsman (the Demiurge, personification of the divine Intellect), who models the preexisting chaotic matter on the eternal mathematical order provided by the Forms. Because God wanted his creation to resemble him as much as possible, the Demiurge imbues the cosmic body with soul: the affinity between the cosmic soul and the human soul is what enables man to have knowledge of the visible world, since pure matter would be unintelligible.

At this point, it should be abundantly clear that the popular characterization of Platonic ontology as positing the existence of a perfect world of Forms, where the ideal models of every single physical object are collected together, is a gross oversimplification. One could argue that oversimplification is necessary in order to convey complex, nuanced theories – such as Plato’s Theory of Forms – to the general public, but if what is presented to the public is an almost cartoonish caricature of the original source material, then one has to wonder whether there are ulterior motives at play. A survey of Plato’s political theory will provide a few clues as to what these motives might be.

1. The philosophical study of being, from the Greek on, óntos, present participle of the verb ‘to be’, and lógos, ‘rational discourse’.

1 thought on “Correcting popular misconceptions about Plato (Part One)”