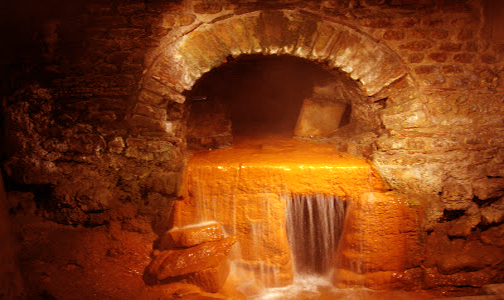 Dom Miguel was drunk. He stumbled into the guarded inner sanctum of the party, warily past the giant anaconda draping the golden shoulders and bow of a statue to Teucros, and into Madame Nova’s famous Hohenzollern dancing room. All within were masked and costumed in a variety of grotesqueries and ornate historic frills. He himself wore a large papier-mâchée robot-head depicting the São Paulo Talos. A woman, one of several dressed as a realistic chameleon of brilliant colours stopped to do a reptilian dance before him, and he laughed, spitting out his berry-wine in a fine cloud from the stoic mouth of his mask. He danced a while with her, holding her long tail, until tossing it aside as he stumbled across the parquet floor.

“It glows, Dom Miguel, in the presence of republicans and liberal terrorists.”
“Oh? And does it glow now, Duke Orléan?”
The Duke held it between them, and indeed the amber seemed to be unnaturally on fire. Miguel took pause, and sobering quickly, cautiously looked about him at the dancing, disguised revellers.

Meanwhile Vasco had entered the temple to Leonor. The priests had removed his weapons and his clothing, and he had been led into a bath of gold-green ichor, there attended by naked slave girls. One of them cut at her forearm, and with the blood drew a circle on his forehead, as another placed a strange wafer on his tongue. When he emerged from this bath he felt supernaturally invigorated, and his vision seemed to cheat him, and the dungeon-like walls of the temple seemed to shift, and the cracks in the stones jump with unseen geckos, and flaming wall torches flowed like fire-rivers. The attending priests were not like those who collected him, and these fiercer inner sanctum clerics wore thick wolf fur, and ferocious wooden masks with straw beards. He gazed upon these wondrously, and they seemed to him as demons. They only stared back, their eyes dark voids under their scowling masks, as he was wrapped in a toga by the slaves.

He was led to a joining vault that was lit entirely in crimson red, and full of sweet-smelling smoke. His hallucinations began then in more earnest, and again he felt the presence of an old god, enormous, animal-like, and reached his hand out in the red haze, as though just beyond his fingertips the view was filled with a horned and bearded face of Pan, regarding him with detachment. He had a feeling of great world-forces, indifferent to him.

He stumbled forward, and the smoke lifted somewhat, and he saw the vault had pools to either side, and were lined with more slave girls, but these richly coloured with blue and green body paint, and adorned with peacock feathers. At the end of the vault was a tall throne, seemingly made of mammoth bone, and hanging above it was an iron eagle, with three heads. And upon the throne was Leonor, naked save for a gold waist chain and anklets, painted all-blue and draped about by her long black hair. She smiled at him, as he dazedly walked forward, reciting to himself a prayer Dom Miguel had taught him.

O Providence, O Fortune, bestow on me Thy Grace – imparting these the Mysteries.

He paused as he noted Leonor give a command with a nod. And from dark recesses to either side, several of the masked clerics emerged, holding wooden clubs, and leather whips, and he braced himself for initiation.